Which Devices Are Ideal for Individuals Who Frequently Use Social Media Apps?
123rf Stock Photos

There are many reasons why a person would want to use their device for social media apps. One of the most obvious is to access their networks, friends, news, and games while they are out and about and on the town. But, there are also other reasons. For example, I find it convenient to “do” my social media while I am working on complex projects on my computer. When I have Final Cut Pro laid out and cranking it is inconvenient to pop over to Twitter. But, I don’t want that to stop me, so out comes my iPad.

As much as I love my iPad, I have added some other fun devices to my stable of devices. (I have mentioned I am a geek, right?) This also makes having alter egos easier, with multiple devices J Seriously, though, there are apps that are made for devices that impress me more, in some cases, than their big brother apps for the desktop. Ok, enough about how much fun I have with my devices, let’s take a look at a few of them, shall we?

The Samsung Galaxy Note 5 is a fun little device with a screen size of 5.7 inches. According to one report, the mobile device’s touchscreen is larger than the displays of more than 90 percent of smartphones. By utilizing the phone’s pen, you can easily view updates on the social media networks while you are sending text messages, writing emails, or playing games.

When a person captures a photograph, the mobile device lets the user instantaneously add a large number of filters. If a customer takes a video, the smartphone’s state-of-the-art software will automatically stabilize the clip while the video is added to a social media profile. By altering the device’s settings, a user can also cause the camera to focus selectively on specific objects in each photograph. These are features that are not often found in professional cameras, let alone your device!

Ok, sounds impressive, right? This device, coined a “phablet” with its phone-like features and its tablet-like features has had its own ups and downs since coming on to the scene in 2015. Fortunately, you are not alone in trying to decide if it is the device for you. There is an episode of PocketNow’s “After the Buzz” appropriately entitled “Samsung Galaxy Note 5” along with a page of comments, pros and cons. This should keep it “real” and keep you informed!

Released in September 2014, this smartphone has a durable keyboard, a memory card that can hold 128 gigabytes of information, and a screen which features 453 pixels per inch. This quite the listing for a small (or not-so-small) device!

This cutting-edge mobile device can handle three gigabytes of random-access memory, and the phone can capture photographs that feature 13 megapixels. I asked an associate, who is a professional photographer whether 13 megapixels is good or not and his response is “That will print a d*mn good picture for the wall! Mine is a professional camera that is only a couple of years old and it is 16 megapixels.” I guess that says something about the Passport, eh?

On average, the BlackBerry Passport’s battery can provide power for 30 hours. If a user continuously watches videos on the social media networks, the phone will have a battery life of approximately 11 hours. I guess that means that you can text for 30 hours, but should be aware that you can only watch three or four full-length videos before re-charging.

The smartphone is equipped with BlackBerry Blend, which is a trademarked program that lets customers easily transfer files from tablets, computers, and social media networks. A laptop will be able to receive instant updates from social media apps when it is connected to the BlackBerry Passport.

This tablet features a three-dimensional touchscreen, and consequently, the apps of social media networks will respond to hard touches differently than gentle touches. Does that add a new twist to iPad usage or what?

With a size of 12.9 inches, the particularly large screen allows users to view an additional column of icons. That is pretty cool until you try to fit it in your evening bag or oversized wallet. Then again, I’m not sure that we were expecting it to fit, were we?

According to Apple, the operational speed of the device’s central processing unit has been increased by approximately 70 percent. You know what else? When the tablet is accessing social media networks, the iPad Pro can sometimes double the speed of Wi-Fi!

The BlackBerry Z10 has a virtual hub, which allows an individual to see a list of updates from a wide variety of social media networks. While you are utilizing the Facebook app, the state-of-the-art smartphone will give you the ability to determine whether or not certain friends are situated in nearby locations. Is that cool or what? Especially cool for all of you Starbucks lovers!

Additionally, the BlackBerry Z10 can create a comprehensive list of events that have been posted on various networks, such as Twitter, Facebook, Evernote, and Periscope. (Evernote has events?)

Pictured below is the BlackBerry Z10 (left) alongside the iPhone 5 (right) to give an idea of size and comparison. For an even better comparison, we have another video from PocketNow and it happens to be a comparison of these same two devices! 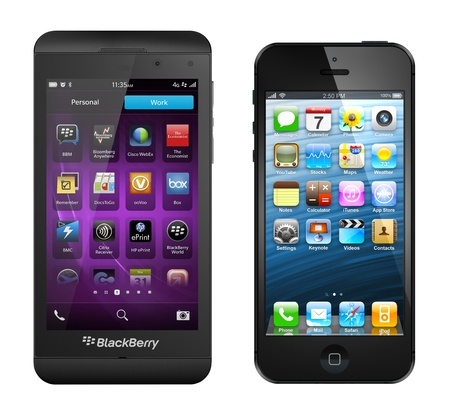 Before we go, a quick look at another device, the HTC One. When using this smartphone, an individual may opt to view notifications that are related to the social media networks as soon as new posts are created. Furthermore, the device allows users to combine lists of contacts from various social media networks. Now, that is convenient, isn’t it?

The phone has 32 gigabytes of memory and two gigabytes of random-access memory. The device processor isn’t too shabby either, containing four cores.

Whew.. I don’t know about you, but I have a bunch of numbers and features floating around in my head and some sort of craving (do you call it that when it relates to devices?) to go play with social media networks on one (or more) of these devices! Which one should I try first? How about you?

Deborah Anderson (@SocialWebCafe) is the host of Social Web Cafe TV and co-host of the iHeart Talk Show, Marketing Momentum w/Charles & Deborah. She also blogs on her own blog, SocialWebCafe.com. She wears many hats, from singing Jazz on Sunset Blvd in Hollywood to helping graduate learners (Masters, Doctorate) learn how to analyze statistics. Writing and Music are her passions of choice.

Previous ArticleSeven Ways to Boost Your Mobile Marketing in 2016
Next ArticleHow to Get Morgan Freeman Voice on Waze
THE Skinny
Socialnomics Trends December 5, 2021