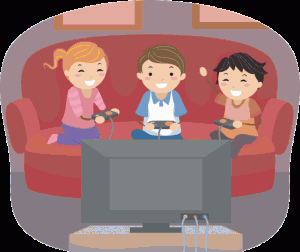 I have found that some of the most interactive people are those who enjoy gaming, specifically multi-player games. It is interesting that there are those who actually think the opposite, that gamers are anti-social. It really has to do with how gamers socialize. That doesn’t rule out the anti-social type that plays the single player games, but there is really a lot of buzz about the social aspect of gaming. Let’s look at how well gamers socialize and engage.

I’ll be honest with you; gaming is not my thing. I am a musician and we have our own interactions and community. However, as a social media marketing expert looking in from the outside, I can say that sometimes there might even be some envy, wanting to be a part of the gaming in-crowd. This is especially true when referencing cosplay (below). After all, I’m known for my fun colored wigs, so I’m already half-way there, eh?

Let’s look at some of the relationship-building aspects, and some of the benefits of being part of the gaming community, coming from an admitted non-gamer like myself.

The games are fun. People wouldn’t play them if they were not. Hey, even I have enjoyed playing games. I was into “Zelda” enough to know that if I didn’t stop myself I was going to become addicted and skip going to work at the mortgage company. Believe me, I know they are fun! Games like Farmville (see stats in 2013, compliments of TechCrunch) would not be as popular on Facebook if games were not fun.

The multi-player games involve interaction. While it is true that you may not be having deep intellectual conversations while playing the games (notwithstanding games like “The Sims”), there is still an engagement process that happens when participating in multi-player games. Even requesting friends to join in, on the social network games, involves engagement. Here is a very academic approach to studying gaming engagement in the context of a learning environment, from a science journal.)

As a sidebar, I remember hearing that your Klout score would go up with spending more time playing games on Facebook. It makes sense, that the games that encourage interaction on the Facebook platform also increase Klout. So, the more time spent in the Facebook game, the more your social score on Klout increases with all of the natural Facebook interaction resulting from the games.

The game world engagement can sometimes cross over into real world engagement, providing even more opportunities. An example of this is the widely popular cosplay. According to Wikipedia, cosplay is really anything that involves wearing a costume to represent a known character. But, cosplay is also really popular in the avatar replication and there is even a site dedicated to cosplay, at cosplay.com. There are youtube videos showing how to dress up as your favorite game character. These videos include tips on costume, wig, and step-by-step makeup techniques. Here is an example of how to dress up like Princess Zelda:

The cosplay does not have to follow rules or be gender specific. For example, here is a fun how-to for looking like Mario (from Mario Brothers), as a female. This gal gives you suggestions on clothing and an adaptation for Mario’s brother, Luigi.

There are different places on the Internet where the gamer can join communities to meet other gamers. This can assist the gamer in the social media connections as well as crossing over to the real world interactions.

Twitch.TV – stream your games live. Here is an excerpt from a recent panel discussion that I hosted with “Alex” providing some context for Twitch.tv.

Here are additional sites that may be helpful for gaming socialization:

And, this site is helpful in obtaining information about all different types of games: PlayerX.co.uk

One of the things that really impresses me about the world of gaming is how uninhibited and free the community is. There is a sense of “free to be yourself,” and yet, with the inclusion of virtual reality, there is a freedom to be someone else, too. Either way, engagement becomes an viable option. With gaming there is the opportunity to connect the real world with the virtual world to whatever level you desire, with the interaction crossing over from one world to the other.

Gaming may not be for everyone, but there are a lot of resources available to the gamer that allows for social activity beyond just the game. Those of us who are not gamers could learn a lot about the level of socialization that goes into successful gaming.

Deborah Anderson (@SocialWebCafe) is the host of Social Web Cafe TV and co-host of the iHeart Talk Show, Marketing Momentum w/Charles & Deborah. She also blogs on her own blog, SocialWebCafe.com. She wears many hats, from singing Jazz on Sunset Blvd in Hollywood to helping graduate learners (Masters, Doctorate) learn how to analyze statistics. Writing and Music are her passions of choice.

Previous Article6 Best Social Networks for Gamers
Next ArticleWhy Every Marketer Needs to Have a Full Understanding of Web Hosting
THE Skinny
Socialnomics Trends October 1, 2022