How Will the Trade War With China Affect Small Businesses in 2021?

How Will the Trade War With China Affect Small Businesses in 2021?

The ongoing trade war between the United States and China kicked off in January 2018, when the United States’ president introduced tariffs on washing machines and solar panels. By late March of that year, tariffs had been applied to more than 1,300 categories of Chinese imports to the United States. China responded shortly after that by imposing taxes on 128 types of goods imported into the country from the U.S. Tensions increased during the rest of the year and throughout 2019.

By early 2020, both countries agreed to tariff exemptions on certain goods. However, the friction between the two nations is far from over. Here’s a look at what people associated with small businesses should expect in 2021.

It Will Exacerbate Overall Uncertainty

Both China and the United States will eventually take part in the second phase of the agreement that led to the easing of some tariffs in 2020. However, it’s unclear when those discussions may happen and the possible effects of the change of leadership when Joe Biden assumes his role of U.S. president in January 2021.

Scott Kennedy, senior advisor and trustee chair in Chinese Business and Economics at the Center for Strategic and International Studies, explained, “There is a lengthy transition to go through and a pandemic to bring under control. Perhaps we’ll see a continuing ceasefire in the trade war, but it’s way too early to know if the tariffs will be removed or the actions against Huawei and others will be undone.”

It seems apparent that the United States’ tough stance on China will not disintegrate with Biden in office. The president-elect has publicly stated the need to maintain it. However, Biden’s approach will likely be a calmer and less-provocative one than Trump tried, if his previous period as vice president is any indication.

Not knowing what the future holds concerning the trade war adds to the pressure that many small business owners feel. However, they can influence what’s in their control by creating an action plan describing several possible scenarios related to tariffs and how they would respond if they came to pass.

It May Increase Business Costs

Since it is not clear what the second phase of trade talks between the United States and China might cause, the best approach is to examine the effects felt by small business owners when tensions were at a high point.

A 2019 study examined how small business owners felt about tariffs, the economy’s future and other key matters affecting their operations. The results showed that 37% of businesses experienced increased costs. Then, 51% of the owners raised prices to cope, and 46% saw reduced sales after that decision.

Other notable findings were that 45% of people polled felt concerned about the future and 11% anticipated a recession in 2021. If entrepreneurs are already under pressure and worried about the future due to a variety of factors — such as decreased foot traffic and the possibility of mandated closures due to the coronavirus pandemic — they could face extraordinary challenges in the next year if the trade war gets worse.

Small business owners should assess how they could implement protective measures if business costs rise. For example, could focusing on excellent service and quality encourage customers to stick around despite paying more? How could entrepreneurs reduce expenses not associated with tariffs to better deal with those taxes?

It May Cause Leaders to Adjust Production Plans

As company representatives grappled with the effects of tariffs, many looked for ways to keep their businesses stable. For example, equipment manufacturer John Deere cut production by 20% in the second half of 2019. That move affected tractors made in two states. Lowered production rates can cause add-on effects. For example, they could lead to layoffs and make it more difficult for buyers to get necessary equipment because of supply shortages.

Uncertainty about tariffs could also make it more difficult for decision-makers to plan for production increases that positively affect a company’s growth. As the trade war between the United States and China continued, President Trump delayed some tariffs, including those on smartphones and laptops. However, a pattern of announcing them and then ultimately holding off restricts business owners from making confident decisions about future production.

For example, a small business might heavily depend on parts sourced from China, and an owner might plan to order more components than usual to facilitate a growth effort. It’s easy to imagine the associated difficulties if tariffs come into effect before the order fulfilment happens, increasing the purchaser’s costs.

Suppose Chinese suppliers comprise a substantial portion of a small business owner’s supply chain. In that case, the smartest approach may be to investigate the options for moving it elsewhere and avoiding the extra taxes.

However, they should remain aware of the possible downsides. For example, it takes time to establish a relationship with a new supplier. Plus, clients may worry about a new provider’s ability to meet fulfilment requirements, especially if the formerly used Chinese company was exceptionally reliable.

It Will Make Companies Less Able to Recover After the Pandemic

The deal that eased some tariffs in early 2020 did not make them all disappear. More specifically, several hundred billion dollars in goods imported into the U.S. from China still have such direct taxes imposed on them. This reality means that many business owners pay up 25% on those goods brought to the United States.

San Diego-based athleisure brand Vivacity Sportswear pays that maximum amount on one-third of raw goods sourced from China, which caused a drop in profits. Companies also faced increased difficulties when closures associated with COVID-19 created a situation where they paid more for Chinese goods and could not sell merchandise as usual.

Some companies pivoted and ramped up their online presence or opened e-commerce stores for the first time during the pandemic. Those things helped, but they did not wholly make up the deficit for enterprises that normally operated physical stores. When tariffs bring more difficulties to businesses already suffering due to COVID-19, those companies will likely have more trouble bouncing back after things return to relative normalcy.

Even with at least one vaccine likely available in 2021, experts caution that the scientific advancement will not cause immediate changes for everyone. Supply chain limitations necessitate prioritizing which groups get vaccinated first.

Moreover, scientists do not know yet if the leading vaccines stop the virus’s spread — they may just prevent symptom development. If so, people will need to keep wearing masks and maintaining safe distances, which could affect their willingness to visit businesses in-person.

Small business owners cannot predict future developments in the U.S.-China trade war. However, by studying some of the known effects — like those mentioned here — they can get in better positions to respond effectively if tariffs on the horizon hinder their business operations in 2021. 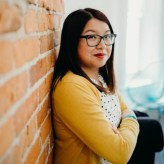 Lexie is a digital nomad and graphic designer. If she's not traveling to various parts of the country, you can find her at the local flea markets or hiking with her goldendoodle. Check out her design blog,Design Roast, and connect with her on Twitter @lexieludesigner.