Are These 3 Apps Dead or Coming Back for More

Are These 3 Apps Dead or Coming Back for More

Within a decade, social media went from a novelty at college campuses to a phenomenon that has fundamentally changed the way we interact with each other. And it is ubiquitous—Facebook is closing in on 2 billion monthly active users. Along the way, incipient social media networks followed the trend of capitalism, which meant that over time, one major player was able to claim a monopoly on each vertical: Instagram for pictures, Twitter for Tweets, Facebook for a “social marketplace,” and so on.

But all technology and companies become obsolete over time—just ask the proponents of the gas lamp, typewriter, VCR, flip phone, or even Myspace and Friendster. Social media will evolve, and its progeny will either evolve with it or be left behind. Although social media usage dropped in 2016, this could be symptomatic of users looking for alternative social networks or being unimpressed with their current options.

As such, a new generation of social media entrepreneurs is rising to meet the challenge and take on the incumbents. Here are three apps that might make a comeback.

Rapchat is an innovative app that allows one to record raps over beats on their phone and send them to friends. With a seemingly simple concept, the app’s sleek interface disguises a powerful content creation engine, which gives users access to hundreds of licensed beats, customized recording options, and an addictive social sharing component.

The app has had over 8 million raps sent since its launch in 2014, and that number is expected to go even higher this year. Much like Periscope, over time, its customer base is finding creative ways to use the app, including battle rapping, song collaboration, and as a way to connect with their favorite rappers who’ve already signed up for the service.

Live streaming is undoubtedly a huge part of the future for a visual component, and Periscope, along with Facebook Live, is its messenger. Already, the live-streaming social media service has been cleverly integrated into causes as diverse as ad campaigns (Red Bull events) and art installations (Shia LaBeouf’s “He Will Not Divide Us”).

Periscope was acquired by Twitter before it launched, so it has the enormous advantage of a pre-existing social network’s backing and audience. Periscope became popular in 2016, but expect its usage rates to skyrocket in 2017, as it’s user base grows. Watch for content creators to use live streaming in innovative and unprecedented ways, with everything from personal training, religious services, contests, marketing stunts, and education finding an audience on the app.

Whenhub is a newer app with a bold vision to change how we “interact, visualize, and communicate” with time. It allows one to create Whencasts—visualizations for stories happening over time—that can be embedded on websites or directly sent to people. It’s aimed at web designers, journalists, teachers, or anyone with a need to visualize time.

One problem WhenHub might run into is offering too much—the app also has an “approach feature” that allows two people to see each other’s locations in real-time as they meet up. While some might see this plethora of features as a boon—one of its cofounders, Scott Adams, described WhenHub as a “startup with the risk profile of an incubator”—companies sometimes fail to gain traction because they offer too many options and overwhelm the customer.

The one commonality that all these social media networks have is their willingness to embrace new technology—for Periscope, live streaming; for Rapchat, the improved audio and recording quality on smartphones; and for WhenHub, GPS location services. In 2017 and beyond, expect other emerging technologies such as virtual reality to be picked up harnessed by the big social network players—because if they don’t do it quick enough, another young entrepreneur will surely take their place. 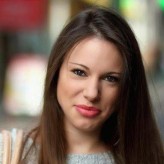 Lisa Froelings is a productivity consultant with over 4 years of experience in human resources working for a major retailer in the US before she decided to build her own small business. Her interests include technology, user experience as well as time management. You may connect with her on Twitter.

Previous Article5 Reasons to Start a WordPress Reseller Hosting Business
Next ArticleTraditional Marketing: Is It Still Effective in the Digital Age?
THE Skinny
Socialnomics Trends December 5, 2021